There is an UGLY Side to every sport...cricket being no exception...Why this Halla Bol!

- March 27, 2015
The ill fated cricket match (India vs Australia World Cup Semi-final - for the miniscule cricket hating public who don't know what I am referring to) raised a tornado on social network and the people who wanted to distinguish themselves from the common junta started defending the Indian team and a particular actress.While this is commendable one wonders if both the parties are deserving of such tenderness. I day dreamed on how wonderful it would be if everyone in my life treated me so well!

One scenario - I get paid unlimited crores, I get the undying devotion from a few hundred million people and I wind up an important match with a few jokes on the media's fickleness, express happiness at having atleast reached thus far, go back home and count some more money. At this point money is of no consequence to me as I can buy all the villages in India and some more. I see nothing really wrong with my strategy or my team's overall performance and fighting spirit so I'm wondering why such a fuss is being made...silly goose the better side won did'nt it?? That's an earth shattering revelation!.....I kept my cool above all else and that is what is going down in history. Indian fans are always crazy and luckily for me there is a lot of infighting within those crazies so I get off easy.. HAH!!

Second scenario - I'm an actress, I come to watch a match where the star player is a friend (?) of mine and I have been identified as a WAG and definitely know that at some point during the match I will grab the eye-balls of a billion people. I have already faced nasty comments which I have squashed with a "oh , but that's so primitive" and have made a movie that shows the mentality of a section of Indian men. Should I or my fraternity be shell shocked at the  trolling I got ,which is admittedly disgusting , or should I just ask people to move on?

We have n+1 religions in India, the +1 being cricket and the 1 billion+ of us know how religion is used to unabashedly destroy communities, massacre people and change the course of history. So why are we registering so much shock at people ranting at a cricket match when cricket occupies the same pedestal.

We seem to be molly-coddling the cricket team and as far as the actress is concerned she had already shown she can fight her own battles.

Lay off you pseudo conscionable bunch of self proclaimed saints, both parties have grown up on cricket and movies and  are well aware of the perils of both. Accountability is just not for the common man!

(P.S: I have gone from Dhoni-is-my-man to Dhoni-Who???, please don't judge me too harshly for my sentiments, I demand the same tenderness you have been pouring on the Indian Cricket Team and a certain actress!)
My Articles

Popular posts from this blog

A Hollow victory - Cricket is a funny game but it gets half-witted in England. 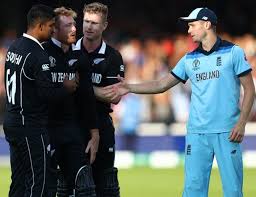 Super Over. Have I said enough? I have no idea what substance the beauties who dreamed up the rule - "In the event of a tie the side who has hit the most boundaries wins" were inhaling. But I'm sure even our boys who play gully cricket would have come up with a better alternative. What gives? Were they so desperate to hand over the trophy to England? If that was the case then forget the Super Over, toss a 2 headed coin ask Morgan to call it heads and hand him the trophy! That would have been the most decent thing to do.

The England team must surely feel that this is a hollow victory. Just because you are on the right side of the fence does not mean that you cannot see the shit that was thrown at the Kiwis with these inane rules. Or for that matter on all the teams in the tournament. The lovely English weather whose unpredictability is common knowledge was thrust on the cricket world exactly like how the British thrust the Royal Family on the rest of the world - forcefull…
Read more

I usually am on the opposite side of the fence on the topic of "Celebrating Myself" or "Celebrating Woman's Day" as I feel that women really don't need a day to celebrate them, what are we going to do the other 364 days of the year? Forget ourselves?!? But then, when you really think about it, it makes sense to set one day aside to indulge ourselves, give ourselves a tiny pat on the back for things accomplished, sacrifices made or just plain surviving in a country which is voted as one of the worst places to be born as a female.

Consider yours truly, most of the time these days I feel like I'm an octopus on roller skates, falling flat on my face every time. "Getting older and getting nowhere" seems to be playing on my mind all the time. The odds are stacked against my gender when it comes to age, as when women grow older they just become old hags but the unfair sex ( I am NOT talking about melanin here) become more distinguished, more sexy,…
Read more

Can Robots For Domestic Help Ever Replace Good Old Bai?

- July 04, 2015
Many dream of using robots for domestic help –  who do our domestic chores perfectly, without a word of complaint. Can a robot really take the place of a human being? Like millions of women in India who live in mortal fear that their ‘kaamwali bai’ will take an impromptu 10 day hiatus (just because she can), there is a glimmer of hope in the not so distant future. The hope takes the form of a domesticated robot which comes trained in all household chores, can switch roles to a nanny or a cook and the holiest of holiest – will never take leave.
This beautiful creation of man will tirelessly strive to achieve your ideal of a spic and span home with made to order meals and happy babies who are put to sleep by a never ending list of lullabies played on a continuous loop.

Sounds too good? Well, hold your breath, the expression ‘best thing since sliced bread’ will soon be amended to ‘best thing since the Bai robot.’ We are in for a ride and though I mostly look forward to it, I c…
Read more